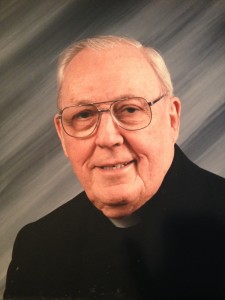 THE URQUHART-MURPHY FUNERAL HOME, 800 Greenwich Avenue, Route 5
Warwick (Exit 12A on I-95)

Born in Providence, a son of the late Frederick W. and Mary F. (Roe) Young, he attended St. Anthony School, LaSalle Academy and Providence College. He completed studies for the priesthood at Saint Mary Seminary in Baltimore, Maryland and Our Lady of Providence Seminary in Warwick Neck. He was ordained a priest on May 31, 1947 at the Cathedral of SS Peter and Paul in Providence by Bishop Francis P. Keough.

Following Ordination, he served as chaplain to the Sisters of Mercy in Cumberland, assistant pastor of St. Joseph Church in Newport and St. Patrick Church in Providence. He served as pastor of Holy Ghost Church in Tiverton from 1971-1994 when he was appointed Pastor Emeritus. His many priestly assignments included director of Catholic Cemeteries in Newport, spiritual director of the Salve Regina Alumnae Assn., chaplain of the Newman Club at R.I. Junior College and diocesan consultor. He also served as treasurer of the Priest’s Senate and Faithful Friar of Fr. Joseph B. Donahue Assembly, Fourth Degree Knights of Columbus. In June 1994 he received from Providence College the “Bishop Hawkins Award”.

Following his retirement, Fr. Young resided in Warwick and assisted as chaplain at Kent Hospital. He then moved to St. Lawrence Rectory in North Providence, serving as administrator pro tem in early 1997. When St. Lawrence Parish closed in 2010, he became the Senior Priest in Residence at St. Ann Parish in Cranston where he served until his illness last month.

He is survived by his sister Claire L. Smaldone of Warwick, his two brothers Frederick W. Young, Jr. of Boulder, Colorado and John J. Young of East Hampton, CT; his twenty-one nieces and nephews and many grandnieces and grandnephews. He was the brother of the late Virginia M. Magnan and Alice M. Young.

His visitation will be held Monday, November 12, 2012 from 3 to 6 pm in THE URQUHART-MURPHY FUNERAL HOME, 800 Greenwich Avenue, Route 5, Warwick (Exit 12A on I-95) and at Saint Ann Church, 1493 Cranston St., Cranston from 9-10 am on Tuesday, November 13, 2012. A Concelebrated Pontifical Mass of Christian Burial will be offered for the repose of his soul at St. Ann Church at 11:00 am. Burial will take place at St. Joseph Cemetery in West Greenwich.

Gifts in his memory to the Fr. Peter G. Young Memorial Fund, c/o Catholic Foundation of RI, One Cathedral Sq., Providence, RI 02903-3601 will be appreciated.

Get the latest updates!

Travel to the Holy Land with Fr. Finelli in 2-21

“A parish in which there is no adoration of blessed sacrament is a dead parish or a sick one.” – Robert Cardinal Sarah

Please be sure to read the information we have for “Reopening Safely” before you come.

Check out our schedules

Now you can get your Mystic Monk Coffee right from our website! Every order, helps Holy Ghost. Just select the logo below.

* During Coronavirus, the office will only be open by telephone. No in person visits.

In emergency, leave a message, someone will return your call!