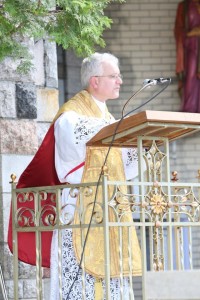 Father Finelli was born and raised in Woosocket, Rhode Island. He is a graduate of Woonsocket Senior High School. Following High School, Father attended Rhode Island Junior College in Lincoln (now CCRI). Then he entered Holy Apostles College & Seminary in Cromwell, Connecticut. The next year, he became a member of the Order of Friars Minor in Kennebunkport, Maine. Father Finelli was a Friar for seven years while studying for the priesthood.  During his time with the Friars, he received his B.A. in Philosophy from St. Hyacinth College Seminary in Granby, MA.  He began his theological studies at Holy Apostles Seminary in Cromwell, CT. Following his second year of theological studies, he was transferred to St. John’s Seminary in Brighton, MA. He received a Mdiv from St. John’s in 1991.

Along with his many priestly duties, Father is very active in the New Evangelization through the use of new media and technology.  He is the host of the iPadre Catholic Podcast, which debuted in 2005. Father Finelli has produced over 300 episodes with over 1.5 million downloads.  Father’s online ministry reaches thousands of people world wide.

You can find Father’s podcasts, blog, videos links to his online social networks at iPadre.net.

Stations of the Cross

Get the latest updates!

Resources for the Mass

Travel to the Holy Land with Fr. Finelli in 2021

Check out our schedules

Now you can get your Mystic Monk Coffee right from our website! Every order, helps Holy Ghost. Just select the logo below.